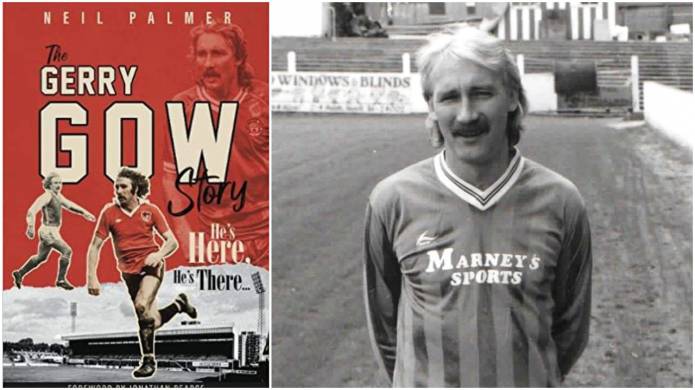 The Neil Palmer publication entitled He’s Here, He’s There: The Gerry Gow Story looks back at Gow’s career which saw him become a legendary Bristol City cult figure during the 1970s while the highlight of a move to Manchester City saw him play in the famous 1981 centenary FA Cup Final with Tottenham Hotspur.

Much of the book is devoted – understandably – to his time at Bristol City where he made nearly 400 appearances for them and was a member of the side which achieved promotion in 1976 to the old First Division.

After a season at Manchester City and that cup final with Spurs which had to be decided by a replay and a Ricky Villa-inspired performance he had spells at Rotherham United and Burnley before heading back down south to take the player-manager’s job at Yeovil Town in 1984.

Gow was a tough-tackling midfielder who made life difficult for his opponents with a no-nonsense style, but he was highly-regarded and well-liked in football and that comes across in the book.

He was also a devoted family man and this too is echoed in the book with his son Chris, who went to Preston School as a student while dad was with the Glovers, playing a leading role helping the author put pen to paper.

Admittedly, when it comes to the Yeovil Town years in the book it is a little bit annoying to see that the famous old sloping pitch of Huish is incorrectly referred to as Huish Park on every occasion with Huish Park, the Glovers’ current ground, not being built on the outskirts of town until a few years after Gow had departed the club.

There are a few other inaccuracies, but that should not detract from what is a good read about a man who certainly played his part in Yeovil Town’s history.

Gerry Gow died on October 10, 2016, at the age of 64 following a bravely fought battle with cancer.

Son Chris said at the time: “Today the world fell apart for our family. My beautiful dad passed away in the early hours of the morning; 64 years young he lost his battle to the most disgusting disease.

“Me and my family are broken hearted and nothing will ever fill the void in our hearts. RIP my hero, my best mate, my dad.”