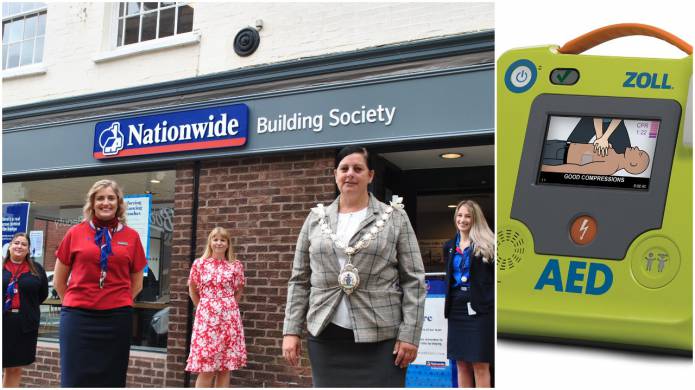 COUNCILLORS have agreed that public defibrillators which will be installed around the town have to be easily accessible for people to help save lives.

Yeovil Town Council agreed to make £9,000 available in its 2021-22 budget for four defibrillators – machines which can be used by people on those who have suffered a potentially life-threatening cardiac arrest.

The locations for these defibrillators have been identified as the Westfield estate near the Co-op store; the Forest Hill shopping centre off Lysander Road, the shopping area in St John’s Road and in the town centre in the vicinity of the Boots store.

Town clerk Amanda Card told members of the council’s buildings and civic matters committee on May 25 that work was still ongoing with sites at Westfield, Forest Hill and St John’s Road, but a defibrillator is to be installed on the outside of the Nationwide Building Society building in Middle Street.

The Nationwide branch has set up an online fundraising page at https://gofund.me/d8008a5d to help raise money towards the defibrillator project.

Councillors were asked, however, whether they would want the defibrillator cases locked or unlocked – meaning would people have to go through a time-consuming process to get the box opened or would they be able to get instant access.

It comes with the obvious concerns and possible consequences of the defibrillators being vandalised or stolen and whether having them locked would help with security.

But Miss Card told councillors that a representative of the Aero Healthcare Ltd – which is working with the council on the defibrillator project – had said that “an unlocked cabinet would reduce access time and time was of the essence to save someone’s life.”

“The London Ambulance Service has a policy that all defibrillator cabinets are unlocked and statistics had shown that of the 5,000 unlocked external cabinets in London since 2018 only three have gone missing,” she added.

And the new Mayor, Cllr Evie Potts-Jones, said: “I don’t think you can put a price on saving someone’s life.”

Councillors agreed the defibrillator cabinets should be unlocked.

PHOTO: THE Nationwide Building Society in Middle Street, Yeovil, has agreed to have a lifesaving 24-7 public access defibrillator installed on the outside of its offices. Branch manager Julie Turner (second left) met with Yeovil Mayor, Cllr Evie Potts-Jones, and Yeovil Town Council clerk Amanda Card (centre) on June 3 to discuss the project and they are pictured with other Nationwide staff members. The branch is setting up an online fundraising page at https://gofund.me/d8008a5d to help raise money towards the defibrillator project. Photo: Steve Sowden.