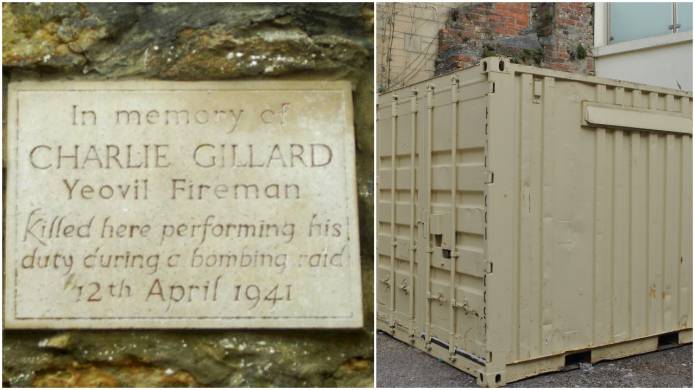 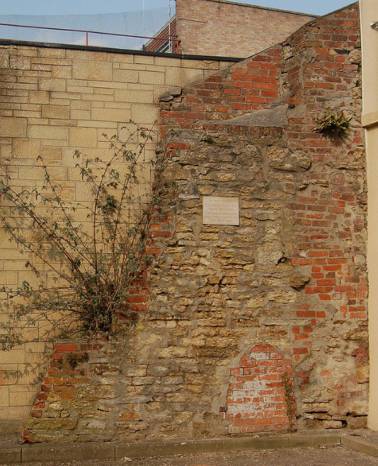 Several delayed action high explosive bombs fell on the Yeovil town centre on the evening of Good Friday, April 11, 1941, and one landed on the Corn Exchange in High Street.

Soldiers of the King’s Own Scottish Borderers were billeted in the Corn Exchange, four of whom were killed and five injured.

The Corn Exchange was nearly completely destroyed in the air raid and a fire was raging in the ruins. Patrol Officer Gillard was killed when a delayed-activating bomb exploded as he fought the fire in the building. He was aged just 37.

PHOTO - RIGHT: The last remaining section of the Corn Exchange wall with the memorial to Charles Gillard.

PHOTOS - TOP:  The memorial to Charlie Gillard is placed on the last remaining piece of the Corn Exchange wall  in Yeovil – tucked in behind Yeovil Library; but unfortunately cannot be viewed at present because of a large metal storage container unit.

The official summary of the raid suggested that incendiary bombs had been attached to the fins of the bomb as the flames of the fire were described as being of a yellow colour as from broken gas pipes and the water sprayed on the fire caused it to roar.

PHOTO - RIGHT: The name of Gillard C. H. on the War Memorial in The Borough of Yeovil.

Eighty years on and the memory of Patrol Officer Gillard will be remembered in a short ceremony which will be attended by the Mayor of Yeovil, Cllr David Recardo.

The Mayor, speaking at Yeovil Town Council on April 6, via the Zoom conferencing technology, said Mr Gillard had been a brave man doing his job for the community.

“The bomb that killed him had a delayed fuse,” said the Mayor. “He was in the building and then the bomb went off which killed him.” 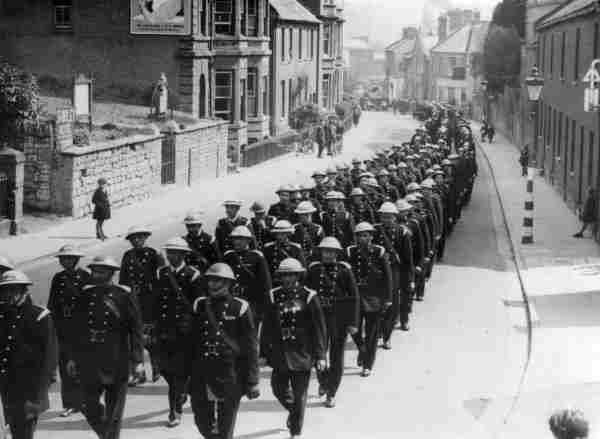 Charlie Gillard was born in Yeovil in 1903 and he and his family lived in the ostler’s accommodation situated in stables belonging to the Three Choughs Hotel located at the junction between Hendford and West Hendford that later become the Chough’s garage and car park for guests and residents.

Charlie married Ada Sutton in Yeovil in 1923 and they lived in Hillcrest Road and they had one son, Dennis.

He joined the Auxiliary Fire Service when it was first formed in 1938 and he served for three years before his untimely death. 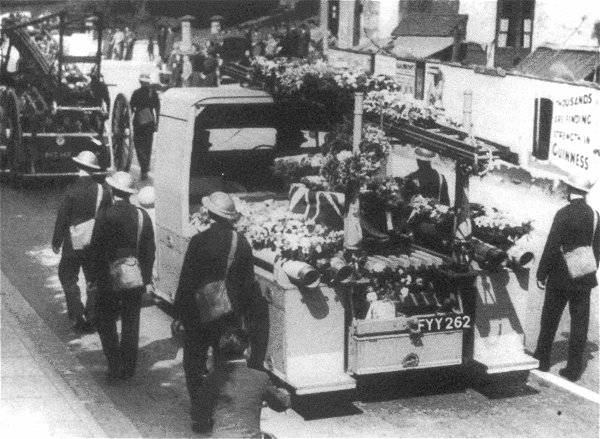 The AFS was created as part of Civil Defence Air Raid Precautions to supplement the work of the regular fire brigades.

Charlie was awarded a ceremonial funeral with a procession through the town where his coffee was placed on the back of one fire engine and another was used to carry numerous flowers.

A section of a military band, the Pipes Band and Section of the King’s Own Scottish Borderers, led a procession of many organisations from King George Street to the cemetery on Preston Road where a large number of friends and townspeople were gathered to pay their last respects.

Photos and information courtesy of the A to Z of Yeovil History website at www.yeovilhistory.info .