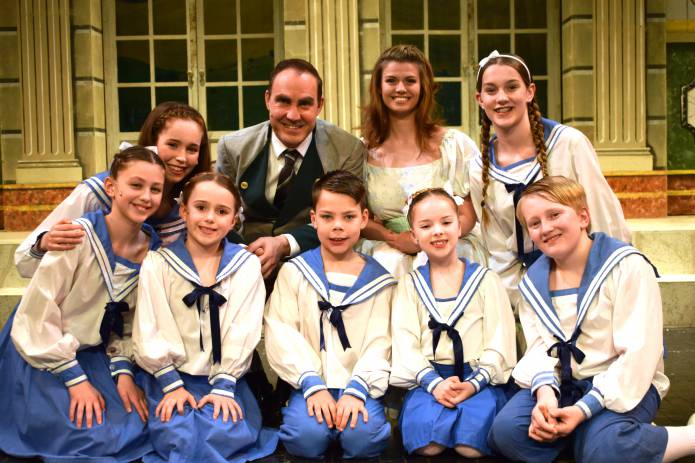 IT was the early evening of March 16, 2020, and cast members of the Yeovil Amateur Operatic Society’s production of The Sound of Music started arriving at the Octagon Theatre in readiness for another performance of the ever-popular musical.

It was the opening show of the second week of the production and YAOS had received some fantastic reviews from audiences who had watched a performance during the opening week.

But the cast was left bitterly disappointed on that evening of March 16, 2020, when it was announced that all theatres and cinemas would be shutting immediately in a bid to deter the ravages of coronavirus taking a hold in the country.

It meant the run of The Sound of Music had to finish abruptly.

The lead role of Maria Rainer had been a character Sarah Westaway had wanted to play on stage for a long time.

So when Sarah, who was known as Sarah Andrew at the time of the production, and her fellow cast members were told the run was coming to a sudden halt it was a devastating blow.

“Being involved with YAOS' production of The Sound of Music was a wonderful experience,” said Sarah. “Maria is a role I had always hoped to play and I had the time of my life performing the role on the Octagon stage.

“When the show was cut short it was heart breaking, especially to see the children so upset after all the hard work they had put in and for some of them it was their first experience of performing.

“The disappointment was felt deeply by all involved in the show and at time many of us hoped we would be able to finish our second week later in the year.”

Sarah added: “It's strange to think that was all nearly a year ago now. On reflection I'm incredibly grateful that we were able to perform the show for one week and whilst we were cut short by one week, we still had a wonderful five-month journey before that.

“We will always have the good memories, bonds and friendships that we have made thanks to this very special society and show.”

Captain von Trapp was played by Ben Woof in the show and he can remember the “gloomy faces and tears” on that evening 12 months ago.

“Walking down to the Octagon on evening of Monday, March 16, it was apparent that we were not going on stage that night,” he said.

“The crowd that had formed outside the theatre doors stood with gloomy faces and the tears streaming down the cheeks of the children who were playing the parts of the von Trapp children confirmed that Covid-19 had won and we wouldn't be completing the run.

“It was a shame in so many ways. There had been so much hard work and commitment put in to the creation of the show and I know that everyone felt in full stride after the first week, so the impossibility of the second week seemed devastating and somewhat cruel.

“The only silver lining was that we had got to perform the show for one week and the glowing plaudits we received.”

More memories of 12 months ago from a number of the cast members can be found in the March 2021 edition of the Yeovil Press community newspaper.

PHOTO - TOP: Captain von Trapp (Ben Woof) and Maria (Sarah Westaway, who last year at the time of the show was Sarah Andrew, but was able to get married during a break in the lockdown restrictions) are pictured with the A-B-C Group of children during a dress rehearsal of The Sound of Music at the Octagon Theatre. Photo: Christine Jones.

The March 2021 edition of the Yeovil Press community newspaper is available in digital format – please press on this link - https://bit.ly/2OFA8N2 .