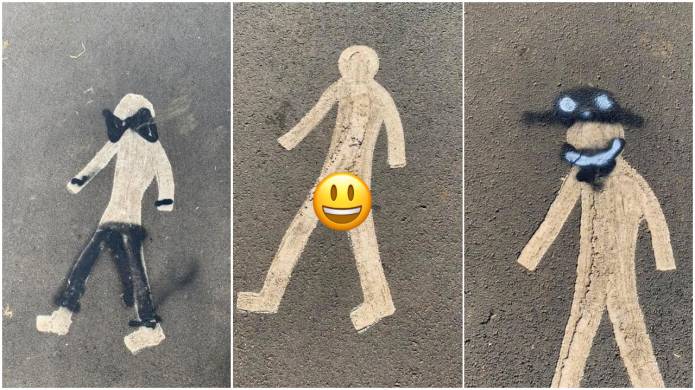 PRANKSTERS have added “male parts” to some of the pedestrian markings along a well-used footpath through the Abbey Manor estate in Yeovil.

Cllr Jeny Snell spoke about the issue at Brympton Parish Council’s monthly meeting on February 24 which was held via the Zoom conferencing technology.

While the “artwork” could be classed as graffiti, Cllr Snell described it as a “bit of fun” although some of the drawings might cause upset.

The pedestrian footpath markings have been “amended” along the footpath from Oak Tree Park down through the estate and past Malmesbury Court towards Stourton Way – where the “person” has been given various added things such as a hat, a smile, a bow tie and some other unmentionable “bits and bobs.”

“I think it’s all meant to be a bit of good natured fun, but someone might take offence,” said Cllr Snell.

“Each one is different although some of the stuff might be found offensive and if anyone has got small children they might ask questions.

“Some male parts have been added.”

Cllr Snell later told the Yeovil Press: “I think they are fun and everyone needs a little fun at the moment, but I understand some people will not be happy with the rude ones!”

Pictured are some of the drawings, while people can use their imaginations to decide what has been added to the one which we have amended with a “smiley face” so not to cause any offence.