YEOVIL NEWS: This is OUR HOSPICE says the Mayor 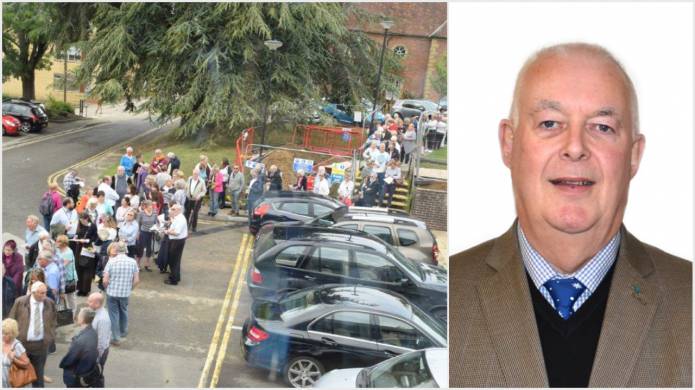 THE Mayor of Yeovil, Cllr David Recardo, believes the hospice inpatient unit should stay open as “we ALL donated the money” to build it in the first place.

Cllr Recardo was one of the 200 or so people who were unable to get into the Octagon Theatre on August 14 for the Public Information Event being hosted by St Margaret’s Hospice officials to give people more details about the proposed closure of the inpatient unit at the charity’s Yeovil hospice in Little Tarrat Lane.

But Cllr Recardo has told the Yeovil Press that he was “surprised as others” to hear the news when St Margaret’s unveiled its controversial plans.

“I was as surprised as others to hear the news especially as the hospice gave a talk that I attended the day before the announcement was made with no clue of what was coming,” he said.

“This is a very sad day for those in desperate need – right here in Yeovil.

“And we ALL donated money to build the hospice so surely it is OUR hospice isn’t it?”

The Mayor added: “I arrived at the Octagon to attend the meeting but there was a huge queue out the door when I got there and by the time I had got to the door there was no room left inside for me.”

The vice-chairman of Somerset County Council, Cllr Mark Keating, who represents the Coker ward at County Hall, did manage to get a seat in the Octagon for the Public Information Event on August 14.

But he told the hospice bosses that he was “angry that there were 200 people outside who couldn’t get in” such has been the intensity of opposition to the proposals.

“This is a bad venue for this meeting,” he told the hospice panellists sat on the Octagon stage. “It’s a shambles. I’m disgusted – you under estimated the feeling of people. People have been denied.”

The Mayor also said he had been surprised to hear that if you wanted a donation to stay at the Yeovil hospice you had to make it known.

“Personally I was surprised to hear that if you want your donation to stay in Yeovil you must make the payment payable to St Margaret’s (Yeovil) otherwise it goes into the bigger pot,” he said.

And he was also unhappy that St Margaret’s Hospice runs its own funeral service – another hot topic of issue among opponents to the inpatient unit proposals.

Accounts for Hospice Funerals LLP, who run the funeral service business, show that in the year ending October 31, 2018, it had made a loss of £320,862 in its first year of trading.

These accounts were published by Companies House on July 28 – just a couple of days before St Margaret’s Hospice announced its bombshell news about the proposed closure of the inpatient unit at Yeovil.

Although hospice officials have categorically denied there being any link between the two – people have been quick to question this aspect of St Margaret’s business.

And the Mayor said: “I personally don’t think the hospice should be in the funeral business – that’s what our many funeral directors are in business to do.

“To spend hundreds of thousands of precious pounds setting up the funeral business I think has driven donors away from St Margaret’s – including me.”

The accounts for Hospice Funerals LLP show that although it made an operational profit in its first year, the administrative costs in setting up the business had led to the large overall loss.

PHOTO – TOP: Cllr David Recardo, Yeovil Mayor, and the large queue which formed outside the Octagon Theatre on August 14 with people wanting to attend the Public Information Event being hosted by St Margaret's Hospice officials.