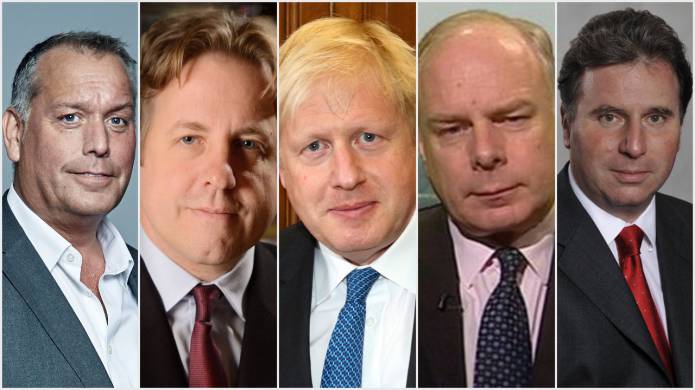 Mr Fysh has written a letter to the PM with the support of fellow Conservative MPs David Warburton (Somerton and Frome), Ian Liddell-Grainger (Bridgwater and West Somerset) and Sir Oliver Letwin (West Dorset).

“I have joined forces with other local MPs to write to Boris Johnson urging him to support us in finding a solution to the issues being faced in the end of life healthcare and social care services,” he said.

“We must work together with the Government to make sure that we look at the funding for social care, hospice and end of life care together in order that our communities are best served.

“The rural nature of Somerset and Dorset makes it even more essential that these services are well funded as they are a lifeline for many.”

It comes after St Margaret’s Hospice announced that it was proposing to close the 12-bed inpatient unit at its hospice facility in Yeovil – a move which has sparked outrage from local people. 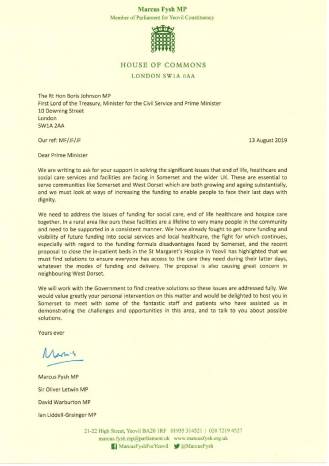 PHOTO – RIGHT: The letter which has been sent to the Prime Minister asking him to help solve the huge problems facing end of life healthcare and social care services in Somerset.

Mr Fysh, in his letter to the Prime Minister, said: “The recent proposal to close the inpatient beds in the St Margaret’s Hospice in Yeovil has highlighted that we must find solutions to ensure everyone has access to the care they need during their latter days, whatever the mods of funding and delivery. The proposal is also causing great concern in neighbouring West Dorset.

“We will work with the Government to find creative solutions as these issues are addressed fully. We would value greatly your personal intervention on this matter and would be delighted to host you in Somerset to meet with some of the fantastic staff and patients who have assisted us in demonstrating the challenges and opportunities in this area and to talk to you about possible solutions.”

Mr Fysh spoke at the Public Information Event at the Octagon Theatre on August 14 and hosted by St Margaret’s Hospice officials who tried to explain the reasoning behind the possible closure of the inpatient unit at the Yeovil site – a lack of funding and a shortage of staff.

The MP said he was proud to be serving the Yeovil community and said he would do all he could to keep the unit open.

“I have been looking through the finances and there doesn’t seem to be a problem,” he told the St Margaret’s Hospice officials. “I would like to help the community to raise the money needed.”

He said he was speaking with the Prime Minister and the Health Secretary Matt Hancock.

And he added: “Why hasn’t the charity come up with a plan?” I want to work with the charity and the trustees to keep the inpatient unit open.

“We don’t feel we can travel to Taunton for inpatient unit services. Please reconsider this decision.”