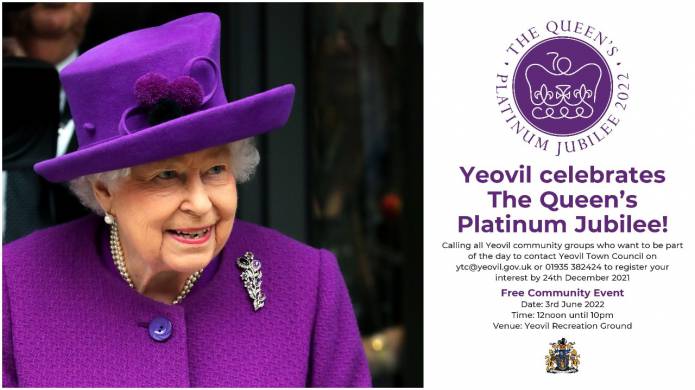 LOCAL groups and organisations are being invited to get involved with a big community event in Yeovil next year to celebrate the Queen’s Platinum Jubilee.

A four-day bank holiday weekend is to be held to mark the Queen’s 70 years on the throne from Thursday, June 2, through to Sunday, June 5, and there will be lots of British ceremonial splendour and pageantry across the nation.

Yeovil Town Council is planning on holding a celebration event at the Yeovil Recreation Centre – better known to most as Mudford Rec – on Friday, June 3, between midday and 10pm.

The plans include live music, refreshments, displays and activities and the council has formed a working group to organise the event which is hoped will bring the local community together to celebrate the Queen’s 70-year reign – the first-time any British Monarch has reached this historic milestone.

If any local youth group, charitable organisation, school, band, performers, clubs etc want to get involved and be a part of what should be a memorable occasion for all of the family to enjoy – please email deputy town clerk Sally Freemantle at sally.freemantle@yeovil.gov.uk or call 01935-382424 or pop into the council’s offices at the Town House in Union Street, Yeovil.

Yeovil Press editor Steve Sowden, who has been invited to sit on the council’s working group for the planned celebration event, said: “It should be a fantastic occasion to celebrate the Queen’s 70 years on the throne.

“It would be really great if we could get as many local groups and organisations involved to really bring the community together.

“I know that a number of groups have already come forward to show their support for the event, but it would be great to have lots more involved.”

It was on February 6, 1952, that the then Princess Elizabeth immediately became Queen following the death of her father, King George VI. Her coronation took place at Westminster Abbey on June 2, 1953.

Part of the Platinum Jubilee celebrations next year will be beacons being lit across the country on the evening of Thursday, June 2. This will take place in Yeovil with a beacon being lit on top of the tower of St John’s Church in the centre of town.

Organisers of the Yeovil celebration would love to hear from anyone who is celebrating their 70th birthday on February 6, 2022. You can email Steve at yeovilpress@gmail.com .