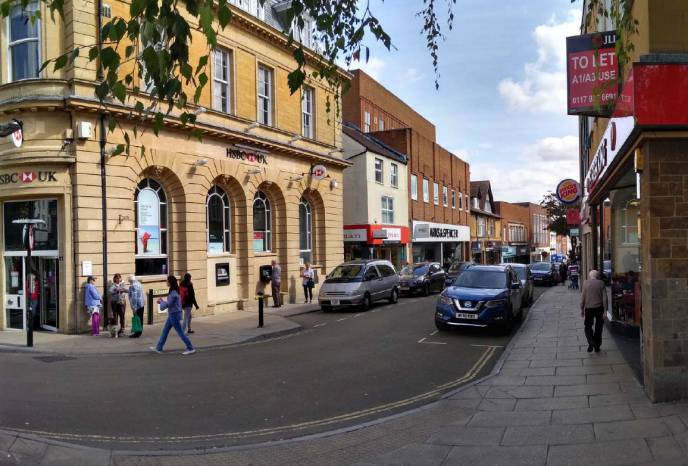 PLANS to pedestrianise the top end of Middle Street in Yeovil town centre have moved a step closer to possible fruition.

South Somerset District Council has submitted its application to Somerset County Council for a Traffic Regulation Order (TRO) to go-ahead with the proposals following an extensive consultation period.

Having looked at the responses submitted and new information received from Somerset County Council officers, the proposal for the TRO has been altered slightly to remove all traffic from that area, including deliveries.

Highways officers advised that because Middle Street is not on a bus route, it would not be possible to use enforcement cameras to restrict vehicle movement at certain times of the day and therefore completely shutting the route to all traffic would be safer.

Proposals have now been submitted to Somerset County Council for them to undertake a full consultation, which will begin shortly. The proposals include additional accessible spaces and loading bays in nearby streets in order to accommodate the current users of the area.

A spokesman for South Somerset District Council said: “The idea to pedestrianise Middle Street is to improve public safety and enhance the public realm around this top end of Middle Street. The proposed TRO submitted to Somerset Council, we believe, will help to achieve this.

“We’ve re-consulted with businesses that will be affected by the complete removal of all traffic to Middle Street and the general feeling that has come back to us is that they will make it work because they see the benefits that pedestrianising the area will bring.”

In further developments as part of the Yeovil Refresh work, the draft Car Parking Review report is currently being produced, with the final document expected to be completed by the end of January. The recommendations will go before the Refresh Board in early March, but early indications from the work show that improved signage is needed within the town centre relating to car parking.

Cllr Peter Gubbins, executive portfolio holder for Yeovil Town Centre Regeneration and chairman of the district council’s Area South committee, said: “Yeovil Refresh is moving forward at a steady pace and we are already starting to see movement with the priority projects that were set following the public consultation.

“Whilst the physical changes haven’t begun yet, Officers involved in the project at the district council have already been approached by potential investors and although it is early stages and these things take time, the general feeling is very positive and things are looking good for the area.

“We have seen increased confidence already in the town centre with the purchase of Glovers Walk by the Martin Group, as well as in the increase of food and leisure retailers into the town centre including chain restaurants such as Nandos and independent businesses doing well such as Texas Rock amongst many others.

“These are all positive signs that the town centre of Yeovil is adapting to change and the Yeovil Refresh plans will help the economy of Yeovil to thrive.”