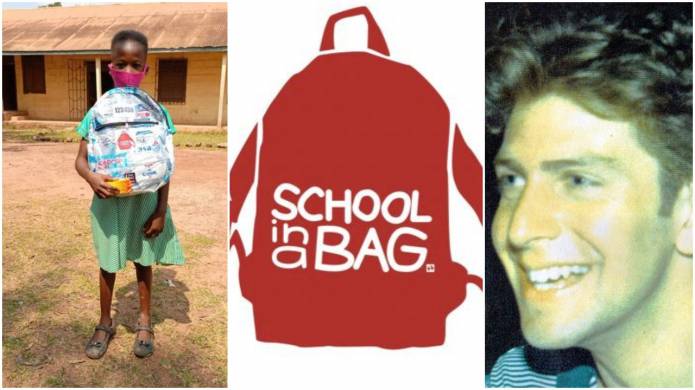 THE School in a Bag charity chalked-up an amazing milestone when it distributed a SchoolBag with the catchy serial number of 123456!

Number 123456 was distributed to Angela, an eight-year-old girl in Year Four, who attends the Adantia Ma Primary School in Ghana.

The SchoolBag was handed out on January 20 by Richmond Smith and the team from the Heritage Charity Foundation – a partner of the School in a Bag charity.

People will also notice that Angela’s SchoolBag is not the traditional red colour as it is one of the charity’s Trashy Bags  - a special Ghanian-based social enterprise which transforms waste plastic into bags.

Each SchoolBag is filled with stationery equipment and resources that will enable a child to write, draw, colour, calculate, express themselves and above all learn.

And each bag delivered to a child will give hope to his or her future and has the potential to transform their lives.

The School in a Bag initiative came from the Piers Simon Appeal which was launched in 2005 after Piers, a former Preston School and Yeovil College student, was killed in the horrific Indian Ocean Tsunami which struck on Boxing Day in 2004.

Piers was just 33 when he was killed while holidaying in Thailand and his family decided to make sure that his name lived on with their charitable work which has supported thousands of people around the globe.

Now the School in a Bag team has launched a new scheme to acknowledge Piers’ half-century milestone – the Fifty4Fifty Challenge.

It is a way for you to raise money for the School in a Bag team with an event to suit you based around the number 50 – it could be 50 repetitions of an activity, something done over 50 days or 50 minutes or involve 50 people?

For more details about the Fifty4Fifty Challenge go to this link - https://bit.ly/3jc92bu .

PHOTO - TOP: Eight-year-old Angela (pictured) with her SchoolBag numbered 123456 which has been provided by the School in a Bag initiative which was set-up as part of the Piers Simon Appeal which was created after former Preston School and Yeovil College student Piers Simon was killed in the horrific Indian Ocean Tsunami of Boxing day 2004.