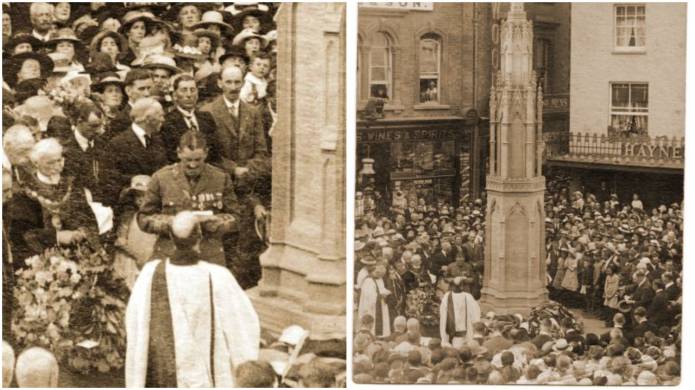 THE Yeovil Press has asked if an event can be held this summer to commemorate the 100th anniversary of the War Memorial being unveiled in the town centre.

Editor Steve Sowden spoke – via the Zoom conferencing technology – at Yeovil Town Council’s buildings and civic matters committee on January 19 where he told councillors that the centenary was fast approaching.

The War Memorial in The Borough was unveiled by Colonel Frank Davidson Urwick, president of the Yeovil branch of the British Legion, at a ceremony which took place at 6pm on Thursday, July 14, 1921. The Mayor and local council officials and clergy also took part in the unveiling ceremony.

“I was thinking that it would be appropriate for some sort of event – Covid-19 restrictions allowing – to be held on or around that date later this year to mark the centenary anniversary of this very special landmark in our town centre,” said Steve. “For example, this could, perhaps, be a ceremony at the War Memorial itself followed by a service at St John’s Church?”

Steve took the opportunity of thanking Yeovil Town Council for the video it produced as part of a “virtual” Remembrance Sunday last year with Covid-19 restrictions forcing the usual Act of Remembrance in November to be cancelled.

“I know the short film was warmly appreciated by many people who found that they were unable to carry out their annual Act of Remembrance in the traditional manner because of the Covid-19 restrictions,” he said.

“In a similar fashion I think the residents Yeovil would equally applaud the town council on instigating an event to mark the 100-year anniversary of the War Memorial which holds so many poignant memories for so many people.”

Steve has also got in touch with the Yeovil branch of the Royal British Legion to see if it would plan on doing something to mark the occasion.

“Hundreds of names of men, women and children who died during the First World War, Second World War and the Falklands War adorn the War Memorial which has stood proudly in The Borough of Yeovil town centre since July 1921,” said Steve.

“While those who served in the First World War are no longer with us and the numbers of those who fought during the Second World War are dwindling, it is still so very important for us and the generations who follow to remember those and those servicemen and women who have taken part in subsequent campaigns.”

The 29ft high memorial was designed by Charles Wilfred Childs and sculpted in hamstone by Messrs Appleby & Childs at a total cost of £1,250 – which is around £61,595 in today’s money.

PHOTO – TOP: Pictured (centre from left to right) at the dedication of the War Memorial in July 1921 are Corporation Mace Bearer Henry Jesty, Mayor W. R. E. Mitchelmore and Colonel Frank Davidson Urwick, president of the Yeovil branch of the British Legion and (picture on the right) a long range photo of the  dedication of the War Memorial in The Borough of Yeovil on July 21, 1921. Photos courtesy of the A to Z of Yeovil’s History website at www.yeovilhistory.info/ .