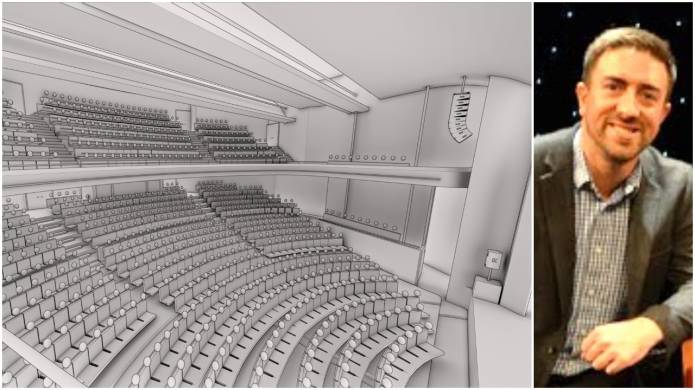 THE manager of the Octagon Theatre in Yeovil has described it as a “historic moment” that councillors have agreed to look in more detail at plans to revamp the award-winning venue with a £23m makeover.

Members of South Somerset’s District Executive committee voted unanimously on Thursday, January 7, in favour of an agreement in principle to proceed with the project that will transform and see major improvements at the Octagon.

The project, set to cost in the region of £23 million excluding VAT, would see the theatre add a fly tower and circle that would take the seating from 622 to 900.

The extra capacity would mean big advances in productions that could attend the venue including touring plays and musicals.

Work would also see the venue become fully accessible throughout, add two additional boutique spaces which could potentially be a cinema/studio plus and additional cinema. The venue would also see purpose-built studios created with an improved community Café Hub and separate restaurants areas.

Adam Burgan, the arts and entertainment venues manager, said: “This was a very important day in the history of the Octagon Theatre and a momentous decision along the way to transforming the theatre.

“All the staff, volunteers and I are incredibly excited about the potential to build on our success and improve the experience of visiting the theatre for all our visitors.

“Many of our team are currently redeployed to support the rollout of the vaccine so this has been very welcome news that when they return there is much to look forward to.”

The Octagon Theatre has been entertaining audiences since 1974 and attracts many visitors from far and wide with a diverse range of artists and events from big name comedians, classical music and opera to rock and folk music, the very best in variety alongside superb plays and ballet, and not forgetting the blockbuster pantomime.

The theatre is also the home to many local community groups where local talent is regularly celebrated.

Last year 125,000 people bought a ticket for an event at the Octagon Theatre whilst thousands more took part in one of the weekly classes as part of our Octagon Academy participatory programme.

“We have more important steps to take in the coming months and the feedback and support from our residents has been very encouraging.”

The Executive Committee’s agreement in principle is an important step and major milestone in the development and improvement of the Octagon. It will allow the project to move forward into the next stages of planning, with work beginning to advance the project further with partners and potential funders.

A council spokesman added: “Although an initial agreement in principle is in place, this is a long-term project that requires sign-off from councillors at further stages of the process, with the business plan, finance plans and planning permission needing to be approved before building work can commence. Planning and construction is currently forecasted to take approximately three years.

“With the project approval in principle The Octagon Theatre’s staff will begin the process of applying to potential funding bodies, which would reduce the amount of initial capital required from the council and the amount loaned for the project that would be repaid by the theatre.”

PHOTO - TOP: Octagon Theatre arts and entertainment venue manager Adam Burgan and an artist’s impression of a new-look theatre auditorium with an upper tier known as the “circle.”