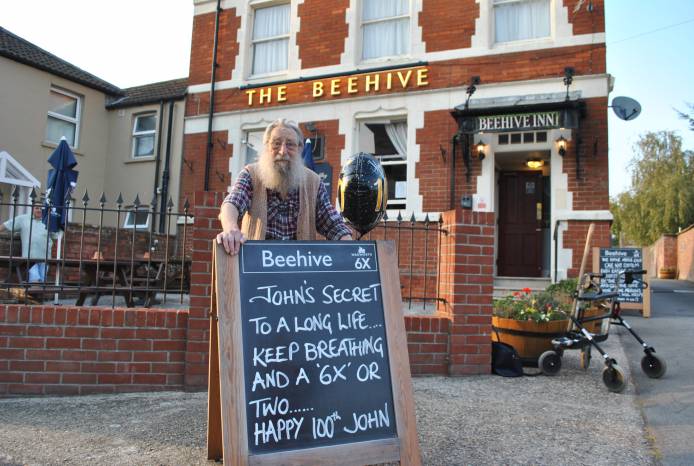 CENTENARIAN John Palmer received the perfect thirst-quenching treat to celebrate his 100th birthday at his local pub in Yeovil - a gift of 100 pints of his favourite tipple.

John, a regular at the Beehive pub in Huish, was presented with the surprise by licensees Ann Ford and Kev Berkley on his birthday on September 16.

Just to clarify – they did not line-up 100 pints of his favourite 6X real ale on the bar ready for him to drink that evening; but they have provided him with a special voucher containing 100 pint glass graphics which will be marked off individually every time they serve him a drink.

The gift was provided by Ann and Kev and the Wadworth brewery and was very well received by John who toasted his big day with a small get-together – obviously observing the social distancing regulations – at his favourite pub.

Kev said: “He’s a real character and we felt it only right that we marked the occasion – it’s not often one of your regulars’ turns 100.

“He’s bright as a button and can provide many an interesting anecdote about the pub and its history.”

Kev added: “He pops in most evenings during the week for a couple of pints – it clearly hasn’t done him any harm!”

Other gifts included an engraved 6X glass, some books and £200 donated by Beehive customers as a refund for his TV licence.

Ann said: “Obviously the Covid-19 restrictions meant we couldn’t celebrate John’s big day as we would really have wanted; but nevertheless we hope he enjoyed his day and many thanks to everyone who came along to wish him best wishes. I think he really appreciated it.”

John showed off his special birthday card he received from Her Majesty the Queen, while there was a novelty birthday cake depicting the hit Frozen film musical. Apparently John had recently found a Frozen toy discarded on the ground and had taken an interest in the movie ever since – who says you can’t stay young even when 100?

John was born on September 16, 1920, when David Lloyd George was the Prime Minister; George V was on the throne; and West Bromwich Albion were the reigning champions of English football. 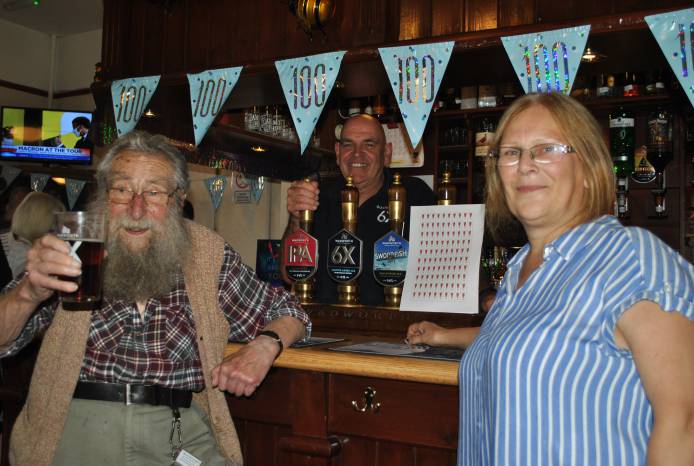 PHOTO - TOP: John Palmer outside the Beehive pub in Huish with a special message for him on the noticeboard. Photo: Steve Sowden.