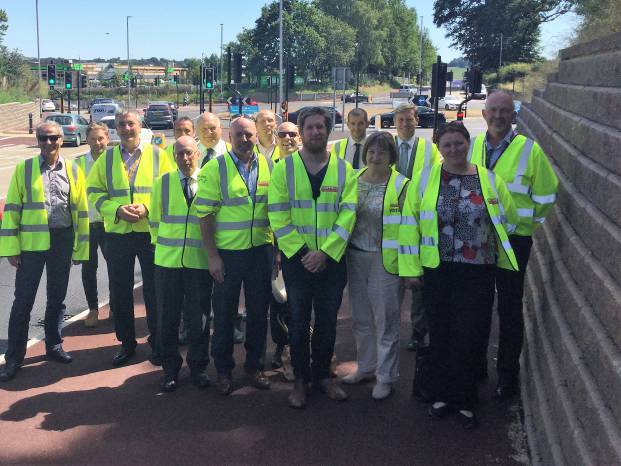 A £14.5million road improvement scheme in Yeovil is now complete – supporting the town’s growth and unlocking more than 1,500 homes and 20 hectares of employment land.

The project is seen as critical to Yeovil’s economic future with several nearby developments at Lufton, Brimsmore and Bunford Park only permitted to go ahead once the road improvements are in place.

The scheme also includes a number of new pedestrian crossings, footpaths and cycleways to promote alternative travel choices in the area.

Representatives from Somerset County Council and contractor Alun Griffiths were joined by funding partners and members of the Yeovil business community to see the completed project.

Cllr John Woodman, Somerset County Council’s highways spokesman, said: “Yeovil is very much a growing town and we’re pleased to have played our part by upgrading its creaking road system along the Western Corridor.

“The improvements are already helping to keep traffic moving during peak times and the scheme’s completion now gives the green light for further planned development to go ahead, providing new homes, creating more jobs and boosting the local economy.

“We’ve had to finely balance the need to minimise disruption with getting the job done and I’d like to again thank the people of Yeovil for bearing with us while construction was underway.

“Now’s the time to look forward, to celebrate the successful completion of this vital project and be positive about what the future holds for Yeovil and south Somerset.”

Dr Simon Dunn, Alun Griffiths’ operations director for the South West, said: “Griffiths would like to thank all the local residents and businesses for their patience throughout the works.

“This has been a complex project and therefore to finish within our agreed timescales is testament to the hard work of both Somerset and Griffiths Site Teams. It has been a privilege to assist in creating a more accessible approach and exit from the town, especially during peak hours, that will benefit the community and region for generations to come.”

David Woan, president of the Yeovil Chamber, said: “The on-time completion of the Western Corridor road upgrades marks the beginning of the next phase in the economic evolution of Yeovil, creating the much-needed road access to the residential and commercial developments taking shape on the Western edge of the town.

“Maintaining traffic flow during these works is quite literally, an art-form, and Chamber is proud to have worked closely with Somerset County Council Highways team and main contractor Alun Griffiths to help minimise the impact of the works, and maintain the positive message that Yeovil remains open for business.”

South Somerset District Council’s leader, Cllr Val Keitch, said: “Now complete, this will have benefits for the town’s road network and additionally benefit the new developments along the Western Corridor and the future of Yeovil. We are grateful to all the partners who have worked so hard to make this happen.”

Steve Hindley, chairman of the Heart of the South West group which allocated £6.49m from its Growth Deal funding, said: “The Yeovil Western Corridor scheme is an important project in our strategic transport portfolio that we’ve funded through our Growth Deal with Government, so I’m pleased to see its completion.

“As well as easing congestion by junction improvements, there are new pedestrian and cycle facilities, and the scheme opens up new housing and business space for Yeovil’s growing economy.”

Minister for Local Growth, Jake Berry MP, added: “We’re committed to boosting economic growth across the whole of the UK and building a Britain fit for the future.

“The Yeovil Western Corridor scheme, made possible with £6.49 million from the Local Growth Fund, is a great example of how we are transforming transport infrastructure so communities are better connected to opportunities in the South-West and beyond.

“With junction upgrades, a new footway and cycle crossing facilities, this scheme will not just deliver real benefits for pedestrians, cyclists and visitors to the area, but also help to unlock new housing and employment opportunities helping to boost the local economy.”

Some of the final finishing touches, including landscaping and planting, are continuing and will take place at the appropriate time.

More information on the background to the scheme can be found at www.travelsomerset.co.uk/westerncorridor.