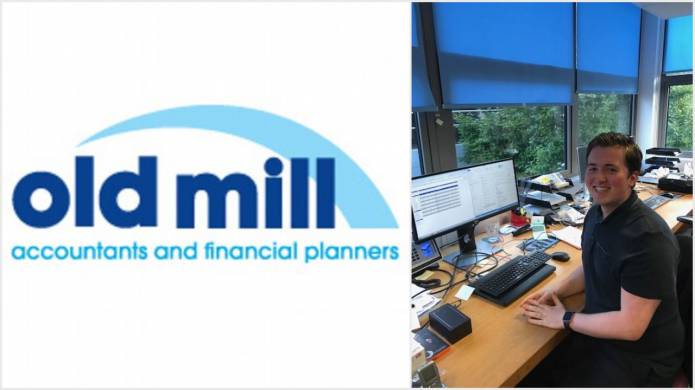 A TRAINEE at the Yeovil office of Old Mill accountants and financial planners has made it through to the finals of the Somerset Apprenticeship Awards 2018.

Old Mill itself has been nominated in the large employer category, while Lloyd Bazley, who is an IT trainee in Yeovil, is named in the individual category.

Having joined Old Mill in the summer of 2016, Lloyd Bazley had previously studied an NVQ Level 3 in IT at Yeovil College.

Lloyd had to submit an application of his own to be considered for the award. This covered his role and duties in the workplace and how the trainee scheme has benefitted him on a personal and professional level. It also required him to recognise his contributions to the organisation and involved a referee recommendation.

Ian Carlson, managing director at Old Mill said: “The Somerset Apprenticeship Awards are run to acknowledge the achievements of exceptional apprentices and trainees who have made an outstanding contribution to the business of their employers, as well as employers that offer exceptional trainee programmes.

“Old Mill is an IT intensive business, so the team needs to work effectively together. Lloyd had no IT experience when he joined Old Mill, but has absolutely thrown himself into the role to become a valued member of the team. He has a very positive reputation in the business as someone that is willing to help, always with a smile on his face! This approach has been shown in his study too.”

Trainees like Lloyd are a hugely important part of the business; currently a quarter of the people at Old Mill are trainees who are onto their second or third professional qualification, supported and funded by Old Mill.

“This highlights that if they have the drive, we can give them the tools to succeed with a supportive culture and real-life experience from the very beginning of their career,” added Mr Carlson.

Lloyd said: “I feel very proud and excited that all my hard work over the last two years has been recognised. I believe I work very hard within my team and tackle any situation to the best of my ability.

“Choosing an apprenticeship with Old Mill was down to my interest in IT and them needing an IT apprentice; it was the perfect opportunity to start my career and it turns out it was the best decision I have made.”

Lloyd explained: “I think that doing an apprenticeship is a great way to learn because you can achieve a nationally recognised qualification and have no debt at the end of it.

"At Old Mill I have had a lot of support and guidance throughout my time as an apprentice, which has helped me to become an essential part of the team. I feel with an apprenticeship you are able to progress through the company and get real, practical work experience.”

The awards, now in their fifth year, are run by the Grow Somerset Talent Group made up of Yeovil College, Richard Huish, Strode College and Bridgwater & Taunton College as well as training providers Somerset Skills and Learning and Acacia Training and Development. The entrants were whittled down to 30 finalists, and there will be 10 winners and one champion of the year.

The winners will be announced on Friday, March 9, 2018, at a ceremony at the Haynes International Motor Museum in Sparkford.