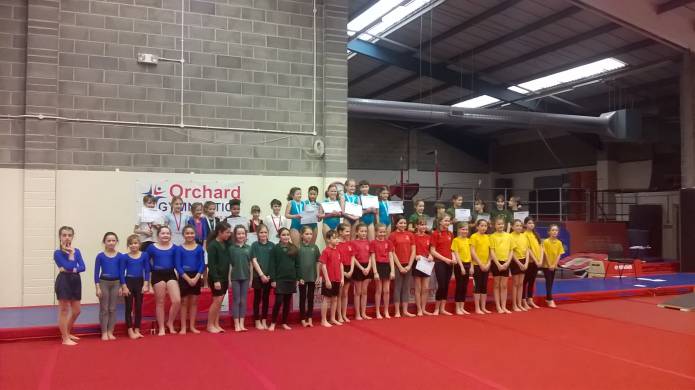 MORE than 250 children from 21 schools across the district had their first taste of competitive gymnastics at the annual South Somerset Key Step Gymnastics Championships held in Yeovil.

Steve Gass, school games organiser, said: “This is our sixth year of this successful competition and this year has been the best attended with over 250 children attending from 42 teams.

“The children competing in such a fantastic gymnastics facility provided a fitting climax for the competition and I would like to thank Orchard Gymnastics and their coaches for hosting the three competitions.”

The top two teams from each competition will progress to a County Final taking place in Yeovil at Orchard Gymnastics in late April and again in early May.

Barry Phelan, who is director of coaching at Orchard Gymnastics, said: “The three competitions this year, have seen over 250 children participate within competitive sport for the first time and it acts as an excellent introduction to gymnastics.”

The district council’s leisure and culture spokesman, Cllr Sylvia Seal, said: “It is fantastic to see so many young children involved in the competitions.

“Following the Rio Olympics, gymnastics has never been more popular and we hope that these young people will be inspired to take up the opportunities on offer at their local gymnastics clubs.”

YEOVIL HALF MARATHON 2017: Look out for the giant SchoolBag!

YEOVIL HALF MARATHON 2017: Just a week to go – still time to enter!

TABLE TENNIS: Yeovil club is back at Westlands