YEOVIL NEWS: Tory MP sees one of his team leave the Conservatives and join the LibDems

A CASEWORKER for Yeovil’s Conservative MP Marcus Fysh - herself a councillor at South Somerset District Council - has defected from the Tories and joined the Liberal Democrats.

Cllr Amanda Broom has vowed that nothing will change in her determination to make a difference to her local community – even though she has resigned from the Conservative Party and joined the LibDems.

She officially joined the LibDems at South Somerset District Council earlier today (Friday, April 29, 2016) and in so doing turned her back on the Tories who she stood for and campaigned with. Crucially, however, she has also quit her post as a member of staff of Marcus Fysh’s team – the Conservative MP for the Yeovil constituency.

Cllr Broom has stressed that her decision to join to the LibDems was nothing to do with her working relationship with Mr Fysh – but more concerned with "not being comfortable supporting" Conservative policies at a national level.

In a prepared statement Cllr Broom said: “I have been increasingly concerned over the current Government’s direction of travel to the right and the potential impact of these policies on my ward members – in particular – those on low pay, long term ailments or disabilities.

“I am also disappointed with the Government’s lack of foresight with regards to sustainable environmental policies including renewable energy.

“It has now reached the point where I am not comfortable supporting or representing the Conservative Party and many of its policies at a national level, hence my decision to leave and move across to the Liberal Democrats.

“In my opinion the Liberal Democrats better reflect a more balanced approach to dealing with the deficit, whilst protecting those in our society less able to survive the increasing division between those who have and those who have not.”

Her decision to join the LibDems has been warmly welcomed by the party’s former leader and an ex-Yeovil MP himself, Paddy Ashdown.

Cllr Broom added: “Despite my change of political allegiance, I remain committed to working with colleagues from all parties and at all levels who continue to promote a fair society and equality of opportunity for the residents of South Somerset, in particular Chard, as I have done since first being elected.

“Nothing has changed and nor will it change in my commitment to represent residents to the very best of my ability.” 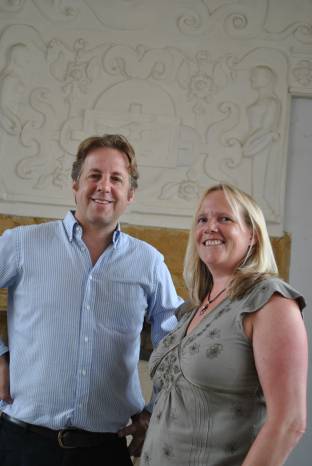 PHOTO – RIGHT: Cllr Amanda Broom with Yeovil MP Marcus Fysh in the summer of 2015. They are now on different sides of the political spectrum, but Cllr Broom has stressed that her defection to the LibDems has nothing to do with her working relationship with the MP.

Cllr Broom, who also sits on Chard Town Council, will be hand delivering a letter to all households in her Combe ward in Chard to explain her decision.

“I will be remaining as your town and district councillor and will continue to work for you as I truly believe I have done since the election last May, but now as a Liberal Democrat,” she writes in her letter to voters.

“If you voted for me solely due to my Conservative label, then I can only apologise for my resignation from the party, though, I can assure you that my level of commitment as a councillor will not be affected.”

Cllr Broom has admitted she may get some sort of angry backlash from her former Conservative colleagues, but hopes to receive a good reception from her new LibDem allies.

The leader of South Somerset District Council, Cllr Ric Pallister, sent out an email to fellow LibDem members on the authority at midday today (Friday, April 29, 2016) to tell them officially of the news.

Cllr Pallister said: “Amanda is an activist for her community and really wants to make a difference to those she represents and Chard in particular.

“As such, I believe that as a LibDem group we will be stronger for having Amanda on board and I welcome her as I am sure my colleagues will.”

Yeovil Press awaits a Conservative reaction to the news of Cllr Broom’s defection to the LibDems.